Phua Chu Kang is so enthusiastic about family holidays he asks his kids to skip school for them. Tsk tsk? Not so! In this month's issue of Singapore's 8 Days digital magazine, we learn how this actor and WorldVentures DreamTrips™ member creates quality time with his family by seeing the world. 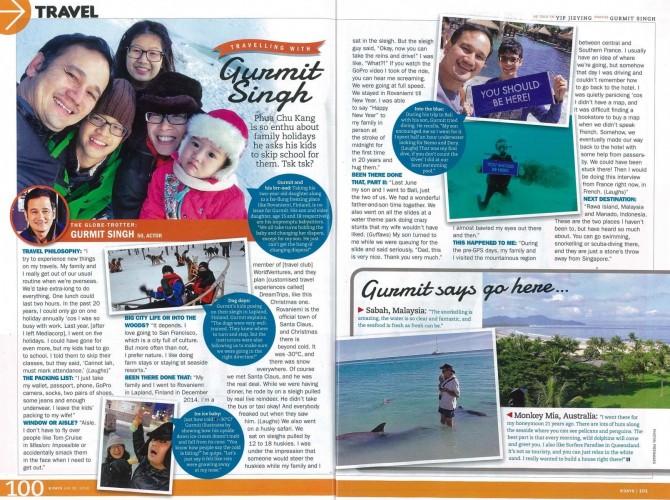 TRAVEL PHILOSOPHY: “I try to experience new things on my travels. My family and I really get out of our usual routine when we’re overseas. We’d take extra-long to do everything. One lunch could last two hours. In the past 20 years, I could only go on one holiday annually ‘cos I was so busy with work. Last year, (after I left Mediacorp), I went on five holidays. I could have gone for even more, buy my kids had to go to school. I told them to skip their classes, but they said, “Cannot lah, must mark attendance.”

THE PACKING LIST: “I just take my wallet, passport, phone, GoPro, camera, socks, two pairs of shoes, some jeans and enough underwear. I leave the kids’ packing to my wife!”

WINDOW OR AISLE? “Aisle. I don’t have to fly over people like Tom Cruise in Mission: Impossible or accidentally smack them in the face when I need to get out.”

BIG CITY LIFE OR INTO THE WOODS? “It depends. I love going to San Francisco, which is a city full of culture. But more often than not, I prefer nature. I like doing farm stays or staying at seaside resorts.”

BEEN THERE DONE THAT: “My family and I went to Rovaniemi in Lapland, Finland in December 2014. I’m a member of (travel club) WorldVentures, and they plan (customized travel experiences called) DreamTrips, like this Christmas one. Rovaniemi is the official town of Santa Claus, and Christmas there is beyond cold. It was minus 30 degrees Celsius, and there was snow everywhere. Of course we met Santa Claus, and he was the real deal. While we were having dinner, he rode by on a sleigh pulled by real live reindeer. He didn’t take the bus or taxi okay! And everybody freaked out when they saw him. We also went on a husky safari. We sat on sleighs pulled by 12 to 18 huskies. I was under the impression that someone would steer the huskies while my family and I sat in the sleigh. But the sleigh guy said, “Okay, now you can take the reins and drive!” I was like, “What?!” If you watch the GoPro video I took of the ride, you can hear me screaming. We were going at full speed. We stayed in Rovaniemi ‘til New Year. I was able to say Happy New Year to my family in person at the stroke of midnight for the first time in 20 years and hug them.”

BEEN THERE DONE THAT, PART 2: “Last June my son and I went to Bali, just the two of us. We had a wonderful father-and-son time together. We also went on all the slides at a water theme park doing crazy stunts that my wife wouldn’t have liked. My son turned to me while we were queuing for the slide and said seriously, “Dad, this is very nice. Thank you very much.” I almost bawled my eyes out there and then.”

THIS HAPPENED TO ME: “During the pre-GPS days, my family and I visited the mountainous region between central and Southern France. I usually have an idea of where we’re going, but somehow that day I was driving and couldn’t remember how to go back to the hotel. I was quietly panicking ‘cos I didn’t have a map, and it was difficult finding a bookstore to buy a map when we didn’t speak French. Somehow, we eventually made our way back to the hotel with some help from passers-by. We could have been stuck there! Then I would be doing this interview from France right now, in French.”

NEXT DESTINATION: “Rawa Island, Malaysia and Manado, Indonesia. These are the two places I haven’t been to, but have heard so much about. You can go swimming, snorkeling or scuba-diving there, and they are just a stone’s throw away from Singapore.”